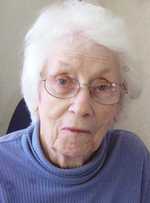 Regina Agnes Smith, Miss Regina, passed away Saturday March 19th, at the Good Samaritan Nursing Home in Wymore Nebraska at the age of 97 due to complications from pneumonia.

Miss Regina was born February 3, 1914 in Summerfield Kansas, where she lived her entire life.  She was the daughter of John Lawrence Smith and Mary Honor Cannon Smith.  Preceding her in death were her siblings, Helen Veronica Smith Fox, twins, John Francis Smith and Mary Frances Smith Augustine.  After graduating from college, she taught at Summerfield Public School for over 43 years, teaching many generations of Marshall County children.  She was active in the Summerfield Community and Holy Family Catholic Church all her life.  Regina was the pillar of the Smith Family, taking care of the people who were ill or in need.

She is mourned by her sister-in-law, Christine Smith, along with her nieces and nephews, Kathleen Speri, Bill and Sherry Fox, Ray and Mary Augustine, Rod and Maureen Anthony, Mary Jean Nonnenmacher, John and Jeanne Augustine, Patrick Augustine, Michael Smith and his spouse, Gary and Barbara Gardner and grand nieces and nephews. She will also be missed by her cousin, many friends, fellow parishioners and former students.

Mass of Christian Burial will be Wednesday, March 23rd at 10:30 AM at Holy Family Church, Summerfield Kansas. The rosary will be prayed at the church 10:00 Am just prior to the Mass. Father Albert Hauser OSB will be the Celebrant. Zita Osterhaus will be the Lector. Servers are Kristn and Felecia Meybrunn. Bill and Shirley Smith will be gift bearers. Eucharistic ministers are Chuck Smith, Rosalie Meybrunn and Shirley Smith. Interment will be at Holy Family Cemetery, Summerfield, KS. Casket bearers will be Tony Smith, Donald Stueve, Kent Dierking, Keith Burger, Wayne Detweiler, and John Meybrunn.

To order memorial trees or send flowers to the family in memory of Regina Smith, please visit our flower store.