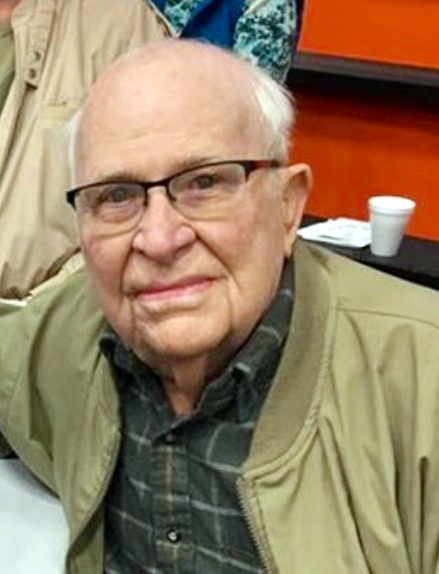 Rex was born June 9, 1925 in Centralia, KS to Alvin and Elsie (Howard) Flentie. He attended Armstrong County School and graduated from Centralia High School in 1943. Shortly after graduation he joined the U.S. Navy. While in the Navy, Rex was part of a flight crew stationed along the East Coast where they would fly patrols up and down the coastline looking for German subs. Following his Honorable Discharge from the Navy after World War II, Rex attended business college in Topeka. There his dreams came true when he met Virginia Kimball of Vermillion, who was working in Topeka.

Rex operated the Flentie Hardware Store until the 1960s when he and Virginia started selling Pioneer seed and chemical products. He served on numerous boards including the Centralia school board, both before and after unification, and the board for the Centralia Care Home. Rex was a member of the American Legion, the Lions Club and was a Mason. He was a member of the First Congregational Church of Centralia, and served in various roles for the church.

Rex and Virginia were pleased to always be in a card group with extraordinary friends over the years. Rex enjoyed raising and showing quarter horses. He was happy to be able to see his sons participate in sports and numerous school activities. Throughout the years, he remained steadfast in supporting all of Centralia High School’s events, and was especially honored to be named The Fan of the Year several years ago. The Fourth of July in Centralia was always a fun occasion as he was able to see his grandchildren participate in the tractor pull, ride floats in the parade, and play bossy bingo along with the frog jumping contest. Rex appreciated dogs, especially German Shorthaired Pointers.

He was preceded in death by his wife, Virginia after 55 years of marriage; his parents; his sisters, Thelma Cross and Wilma Roberts; and his brother, Erwin Flentie.

He is survived by his sons, Craig and Suzy Flentie of Lewistown, Montana, and Allan and Kathy Flentie of Overland Park, Kansas; grandchildren, Nick Flentie of Manhattan, Kansas; Elizabeth and Jeff Snodgrass and great granddaughter Cora of Shawnee, Kansas; Kala and Cole Radovich and great grandchildren, Case, Rori and Kodi of Washington, D.C.; Jake Flentie of Bozeman, Montana; and his sister-in-law, Margaret Carlson of Mahattan. He leaves many nieces and nephews, along with numerous wonderful friends.

Funeral service will be Thursday, December 7, 2017 at 10:30 a.m. at the East Centralia Community Church in Centralia. Visitation will be Wednesday, December 6, 2017 from 5:00 to 7:00 p.m. at the church. Interment will be made at the Centralia Cemetery. Memorial contributions may be made to the Rex and Virginia Flentie Memorial Scholarship Fund, sent in care of The First Heritage Bank of Centralia, 620 4th Street, Centralia, KS 66415.

To order memorial trees or send flowers to the family in memory of Rex Flentie, please visit our flower store.