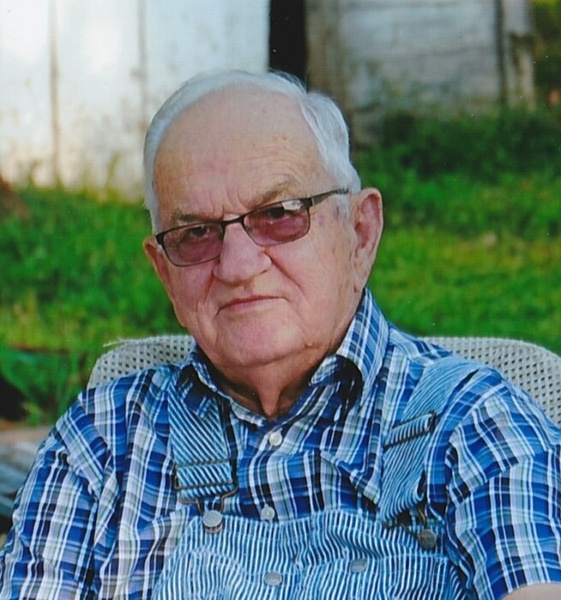 Rex attended Rock Country School through eighth grade, and then Seneca Public High School where he graduated in 1944.  After high school, he farmed with his father and brother, Willis.

In March of 1950, he married Mary Lizabeth Curtis and they lived on the Reist family farm for 65 years.  From this union three children were born David, Randall, and Julie.  Late in his farming career he also worked at the Bern Seed Company.  At age 70, he retired from farming and the seed house, but soon decided he didn’t have enough to do.  So, he worked as a slot tech at the Sac and Fox Casino for 15 years retiring completely at age 85.  In 2015, Rex and Mary left the farm and moved to Seneca.

Rex was an active community member serving on boards for USD 488, Nemaha County Coop, Frieden’s United Church of Christ, Nemaha County Home Health, Axtell Hospital, and Seneca Squares.  Rex and Mary were accomplished dancers being active in Square Dancing clubs in Seneca and DuBois.  They also enjoyed polka, ball room, and round dancing.  They also couple skated in their younger years.  Although not an athlete in high school because he had to work on the farm, Rex was a good athlete playing town team baseball and softball for Seneca, DuBois, Bern, and Frieden’s UCC.  He continued playing softball to age 68.  Rex also loved watching his children, grandchildren, and even great-grandchildren play ball and seldom missed a game.

His family and those who knew Rex were entertained by his quick wit and many one-liners. He had an endless supply of quips that seemed to fit any occasion. Even to the end, the Crestview staff shared the new sayings they had learned.

Rex was preceded in death by his parents; his sisters, Arlene Bates, Leola Farwell, Eleanor Stepan, and his twin brothers, Wilfred and Willis.

Funeral Services will be held Thursday, November 4, 2021, at 10:30 a.m. at Frieden’s United Church of Christ eleven miles north of Seneca.  Interment will be made in the church cemetery.  The family will receive friends Wednesday, November 3, 2021 from 6:00 p.m. to 8:00 p.m. at Popkess Memorial Chapel in Seneca, KS.  Memorials may be made to Crestview Manor Nursing Home or Seneca American Legion Baseball sent in care of Popkess Memorial Chapel, 814 Castle, Seneca, KS. 66538.

To order memorial trees or send flowers to the family in memory of Rex Reist, please visit our flower store.