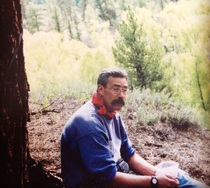 R ichard D. Gantz, left this life on May 26th, 2015 surrounded by family. Richard is the son of Raymond Gantz and Patricia Swartz. He graduated from Kennesaw, Georgia and attended Washburn University in Kansas. Richard served our nation in Vietnam and other areas of operation.

He retired after 25 years of working in the armored car business. In his retirement, Richard enjoyed hiking, camping and photography.

Services to be held at a later date.

To order memorial trees or send flowers to the family in memory of Richard Gantz, please visit our flower store.