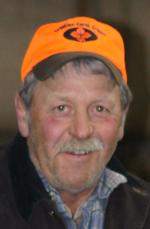 He was born on May 13, 1954 the son of Ernest McClain, Jr. and Vonda (Wisdom) McClain at Seneca, Kansas.  He attended school at Woodlawn, Kansas through the 8 th grade and graduated with the Class of 1972 from Sabetha High school.

Rick wore many hats in his life.  Many knew him as a welder and owner of McClain Welding, a welding teacher, hunter, fisherman, farmer and rancher, bulldozer operator, all along the way making many friends and many great memories.

Rick had a great passion for the outdoors.  Whether it was with a fishing pole, a hotshot, or a shotgun, all of which he loved to share with his family and especially his pride and joy, his grandson, Spencer.

He is preceded in death by his mother, Vonda McClain on December 20, 1994.  Survivors include his wife, Deb of the home; his father, Jr. McClain and stepmother, Lois of Fairview; grandmother, Pauline Wisdom of Sabetha; sister, Debbie Wenger of Sabetha; mother-in-law, Opal Gugelman of Sabetha; daughter, Angie Lourance and husband, Chris of Sabetha; son, Alex McClain of Prairie Village, Kansas; grandson, Spencer Lourance; brother-in-law, Dan Gugelman and his wife, Mary Jo of Prescott, Arizona; sister-in-law, Dee (Gugelman) Grimes and husband, Rob of Topeka, Kansas and several nieces and nephews as so many, many friends.

To order memorial trees or send flowers to the family in memory of Rick McClain, please visit our flower store.