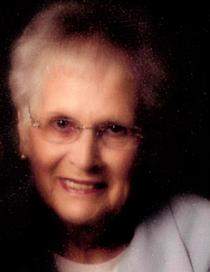 Rita was born December 28, 1924 on a farm near Seneca, KS, the daughter of William P. Altenhofen and Elizabeth Gudenkauf.  Rita graduated from Sts. Peter and Paul High School in 1942.  She worked at Harsh’s Drug Store, War Rationing Board and the Farmers Elevator.

Rita married Fritz Holthaus on April 23, 1946 at Sts. Peter and Paul Catholic Church, Seneca, KS.  They were married for 66 years and raised seven children. She followed with great pride her 16 grandchildren and 11 great grandchildren.

Rita loved being with her husband, Fritz and her family.  She enjoyed hosting holiday family gatherings in her home. She was also a member of Sts. Peter and Paul Catholic Church, St. Ann’s Altar Society, The VFW Auxiliary, and past Vice President of the Seneca Golf Club.

To order memorial trees or send flowers to the family in memory of Rita Holthaus, please visit our flower store.