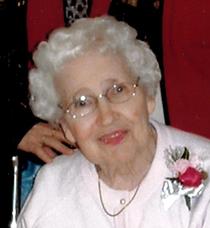 R oberta Agnes Oenbring, 89, formerly of Axtell passed away Wednesday, June 10, 2015 at Life Care Center of Seneca where she had been a resident since June of 2003.

Roberta was born November 30, 1925 on a farm north of Baileyville, the daughter of John C. and Mary (Vondemkamp) Fienhage.  She attended Cottonwood Country School, St. Benedict High School and graduated in 1943.  She worked as an aide in the Axtell Hospital. Roberta's mother, Mary passed away in April 1958.

On April 26, 1952 she married Leonard George Oenbring at St. Mary’s Catholic Church in St. Benedict.  They lived and farmed east and north of Axtell, where they raised cattle and she was a homemaker.  They were married seventeen years when Leonard died on June 16, 1969.  After that she built a room onto her Dad’s house in Axtell and took care of him until he passed away in 1979.  Roberta also worked as a housekeeper for the parish priest for five years, and also at the Axtell Library for a while.

She was a member of St. Michael’s Catholic Church and Guild in Axtell.  She enjoyed her family, friends, and her flowers.  She moved in 2003 to Life Care Center in Seneca, where she made her home.

Roberta was preceded in death by her parents; her husband, Leonard; her brother, Wilfred Fienhage in 1999; her sisters, Margaret Buessing in 2009, Grace Eastman in 2012, and infant sister, Edna.  She is survived by her brother, John Fienhage of San Francisco, CA; sister-in-law, Mildred Oenbring of Seneca, KS; and several nieces and nephews.

To order memorial trees or send flowers to the family in memory of Roberta Oenbring, please visit our flower store.