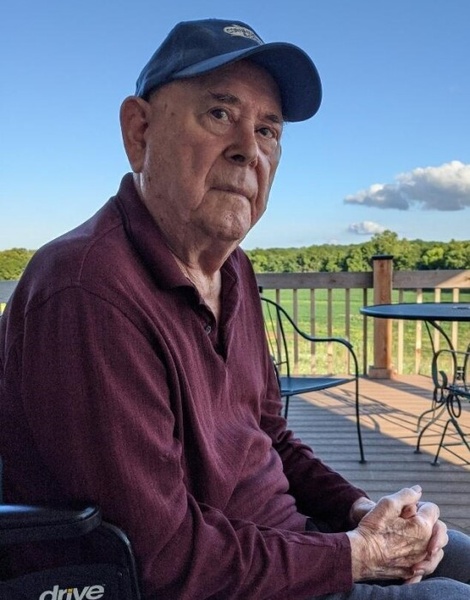 R obert “Earl” Koch, age 93, passed away on February 3, 2021.  Earl was born September 29, 1927 in Centralia, Kansas to William J. and Clementine Mueller Koch.  He met Cora M. Spacek after his brother, Jack, stole one of Cora’s senior pictures and brought it home for his brothers to see.  Earl and Cora married on November 22, 1953 in Centralia, Kansas.

Earl started trucking at the age of 16. Then, after he was able to get his CDL at the age of 21, he hauled cars from Kansas City to Nebraska, South Dakota and North Dakota.  After Earl and Cora were married, they moved to Summerfield, Kansas where Earl and his brother, Ed, owned and operated the grain elevator.  By 1965, Earl and Cora were ready to try lease trucking and worked with Glenn Keim until 1972.  Then, he and Cora established their own corporation of R. Earl Koch Trucking.  He and his drivers did all types of commodity hauling from livestock to U.S. mail routes, watermelons and potatoes.  Mainly he was involved with grain hauling and at one point followed the grain harvest especially in North and South Dakota.

While still running his trucking business in 1981, he purchased a farm in Fairview, Kansas which he farmed until 2005.  Also, Earl and Cora dabbled in buying houses to use as rentals or for repair and resell.

Earl loved Cora and often said he lost his right hand when she passed away in 2013.  Earl also loved his family.  He loved showing off his daughter Jo Ann, her husband, Mick, and granddaughters, Andrea and Allison New at the local diners “Cozy Café,” “Grandpa’s Kitchen,” and “Butch’s Bar.”  Earl enjoyed socializing with friends at “the information booth,” as he called it, at the Cozy Café and Ampride.  Earl was always there for anyone who needed a hand and had some very special friends.

Survivors include a daughter, Jo Ann New, and his son-in-law, Mick New, of Topeka, Kansas; two granddaughters, Andrea (Scott) Nei of Rochester, Minnesota and Allison New of Topeka; and a sister, Mary Ann (Tom) Bulkley, of Topeka.  He was preceded in death by his wife, Cora, on March 29, 2013, as well as six sisters and three brothers.

Memorial services are pending for a later date, due to Covid.  Davidson Funeral Home in Topeka, Kansas is assisting with services.  davidsonfuneral.com

To order memorial trees or send flowers to the family in memory of Robert "Earl' Koch, please visit our flower store.