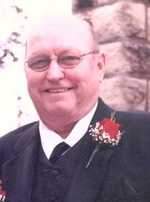 He was born January 18, 1939 to Clem and Clementine Fangman Koch. He attended Baileyville High School, Baileyville, graduating with the class of 1957. In 1961 he enlisted in the Army Reserves and was honorably discharged in 1967.  Rock worked at Goodyear Tire Company, Topeka, for 4 years then began farming. He later started a dairy farm north of Axtell until retirement. He then started part-time driving for Koch & Company, Seneca, later for Koch Excavating until 2008 when he suffered a stroke.

Koch was a member of St. Michael’s Church and the Knights of Columbus Council No. 1163 all of Axtell also Earl W. Taylor Post #21 of the American Legion, Seneca.

April 24, 1962 he married Gladys Glynn at St. Bridget Church, Axtell. They lived north of Axtell until they moved to Seneca in 2002.

He was preceded in death by his parents, a brother Regis, sisters Eileen Rusche, Theresa Spiker, Mary Olberding, and Angela Roeder.

Memorials may be left in Rock’s name for the Seneca EMTs or the Axtell EMTs and sent in care of the family or funeral home.

To order memorial trees or send flowers to the family in memory of Rock Koch, please visit our flower store.