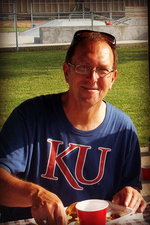 He was born on July 20, 1948, the son of Howard and Leah Brockhoff in Sabetha, KS. He lived most of his life in the Fairview/Sabetha area. Roger served a 16 month term in the US Army from November 1968 until March 1970 in which he was a member of the Honor Guard.  After his time in the Army he returned to the area and began to work with his father at Brockhoff Mfg. Inc. This ended up being Roger’s life work and he eventually bought the business from his father. Roger, along with his wife, Sue, still owned the business at the time of his death.

Roger was a lifelong member of Immanuel Lutheran Church of Fairview, serving as head elder and Chairman of the congregation. He had been a local school board member for 25 years serving as President for at least 19 of those years and also served as a Regional Vice President of KASB. Roger served on the fire department for 16 years reaching the ranks of Lieutenant, Captain, and Assistant Fire Chief.

Roger was an avid KU fan whether it was from the couch or from the stands, he rarely missed a game. In fact, he had attended the Final Four and Championship game just days before the accident that would eventually take his life.  He also loved going to Colorado and spending time in the mountains where he could relax. Roger was a wonderful husband, father, brother, son-in-law, cousin and friend. He was known and respected by many and will be missed by all.

Preceding him in death were his parents and brother, Dean Brockhoff. He is survived by his wife, Sue of the home; four children, Amy White (Tom) of Overland Park, Ryan Doyon (Kathy) of Oklahoma City, OK, Kimberly Aberle (Chris) of Sabetha, and Megan Garber (Andy) of Maumelle, AR; one brother Robert Brockhoff (Luise) of Minden, IA; two sisters, Carolyn Middendorf (Charles) of Topeka and Judy Jones (Damon) of Powhattan; one sister-in-law Karen Brockhoff of Gold Canyon, AZ; four grandchildren Caleb and Luke White of Overland Park and Benjamin and Kaiya Aberle of Sabetha as well as nieces, nephews, cousins and many dear friends.

Visitation is planned for Friday, April 27 from 5p-8p at Popkess Mortuary in Sabetha. Memorial services are planned for Saturday, April 28 at 10:30a at Sabetha High School. The inurnment will be private at a later date and time. Memorial contributions may be made to Immanuel Lutheran Church in care of the funeral home.

To order memorial trees or send flowers to the family in memory of Roger Brockhoff, please visit our flower store.