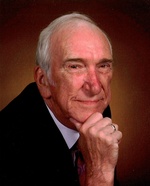 Rolland Hershel Weaver, 76, passed away, February 14, 2011 from post complications of heart ablation surgery at the KU Medical Center in Kansas City. The surgeons tried desperately to save his life with many procedures, but knew our time was short. He was a wonderful husband, father, grandfather and friend to all.
Rolland H. Weaver was born on November 26, 1934 at Guernsey County Ohio to Hershel and Clara (Johnson) Weaver. He graduated from Valley Local High School in Buffalo, Ohio in May of 1952. He enlisted in the United States Air Force in January of 1955, left from Columbus, Ohio by bus to Chicago, Illinois, then on to Syracuse, New York to Sampson AFB, Lake Geneva, New York. This proved to be the coldest place he had ever been. Later he was sent to Montgomery, Alabama for Medical Administration School. He received his diploma in July. A friend talked him into going to Forbes AFB, Topeka, Kansas. He met and married Ardina Ann Dierking on May 29, 1956, to this marriage were born five daughters. They later divorced.
After being discharged from the Air Force on December of 1958 he worked for Capital City Blue Print in Topeka. He worked for the U.S. Postal Service for 30 years of which part of his time was spent as postmaster in Ellsworth, Kansas. He traveled a lot with the post office, attending many schools and conventions. He was part of the National Association of Supervisors and National Association of Post Masters. He was sworn in as postmaster of Ellsworth on June 22, 1985 and retired in December of 1989.
He met and married Patsy K. Schmitt-Fletchall at the Bethany United Church of Christ, Hiawatha, on November 9, 1985. It was a beautiful relationship and lasted for 25 years which they celebrated with a reception, “I Still Do” ceremony on November of 2010 with Pastor Shane Spangler officiating a beautiful musical program at the Fairview Community Center.
While in Ellsworth they owned and operated the Kansas Keepsakes which was moved to Fairview, Kansas in 1989. Rolland and Pat worked and managed the Cozy Café in Fairview for a combination of 15 years. He really enjoyed his time at the Cozy, meeting many friends there. The Cozy was sold to Linda and Bob Lehmkuhl. He then wrote for the Fairview Enterprise, the “My Two Sense Worth” column. He was a people lover. He really enjoyed telling jokes to anyone he met if he thought it would brighten their day. He served as councilman and mayor of Fairview. Rolland found enjoyment in collecting and preserving Fairview history. He was a member, and loved attending the Fairview United Church of Christ.
He was preceded in death by his parents; a sister, Norma Weaver and a brother, Harlan Weaver both of Ohio.
He is survived by his wife, Patsy Kay Weaver of Fairview; five daughters, Denise Reyes of Topeka, Kansas, Diane Goslin (Jed) of Broken Arrow, Oklahoma, Dawn Baxter (Mike) of Holton, Kansas, Doreen Martin (Albert) of Topeka, Kansas, and Debra Perez (Patrick) of Topeka, Kansas; step-children, Diana Emery of Nixa, Missouri, Richard Fletchall (Lynette) of Rayville, Missouri, Chris Fletchall (Bevy) of Holden, Missouri, and 20 grandchildren, and 18 great-grandchildren.

Funeral services will be Thursday, February 17, 2011 at 1:30 p.m. at the Fairview United Church of Christ. A visitation will be held on Wednesday evening 6:30 to 8:00 p.m. at the Popkess Mortuary Chapel in Sabetha. The interment will be made in the Mount Hope Cemetery in Hiawatha. Memorial contributions may be made to the Center for Advanced Heart Care, University of Kansas, 2330 Shawnee Mission Pkwy, Westwood, Kansas 66205, or the Fairview United Church of Christ, sent in care of the funeral home.

To order memorial trees or send flowers to the family in memory of Rolland Weaver, please visit our flower store.