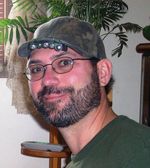 He attended Axtell School and graduated from Axtell High School in 1986. After graduation he continued his education at the Topeka Technical College shortly after graduation. After graduating from Topeka Technical College he went to work for Landoll Manufacturing in Marysville, Kansas for approximately 3 years. He then took employment with Haug Communications in Seneca, KS where he is currently employed.
Ron married Janet Torrey on June 4, 1999 in Seneca, KS. They made their home in Axtell, KS. She survives.

Ron loved being in the outdoors, hunting, fishing and camping with family, and spending time at family get togethers.

He is survived by his wife Janet of their home in Axtell, KS; a son Hunter Koch of the home and a step daughter, Ashley Blonquist of Manhattan, KS; his parents Ralph and Judy Koch of Axtell; His maternal Grandmother, Alberta Violand; his mother-in-law Sandra Torrey of Axtell; two sisters Angela Koch of Axtell and Jennifer Jones and her husband Josh and their children Josh, Tyler and Braden all of Summerfield, KS; and a sister-in-law Debra M. Price and her husband John of Marysville, KS.

He is preceded in death by his paternal grandparents, Vincent and Helen Koch, his maternal grandfather, Marion Violand, and his father-in-law Raymond George Torrey.

A memorial has not been designated at this date but you can send donations to the Ronald Koch memorial fund in care of the Landreth-Popkess Funeral Home, Axtell, KS.

To order memorial trees or send flowers to the family in memory of Ronald Koch, please visit our flower store.