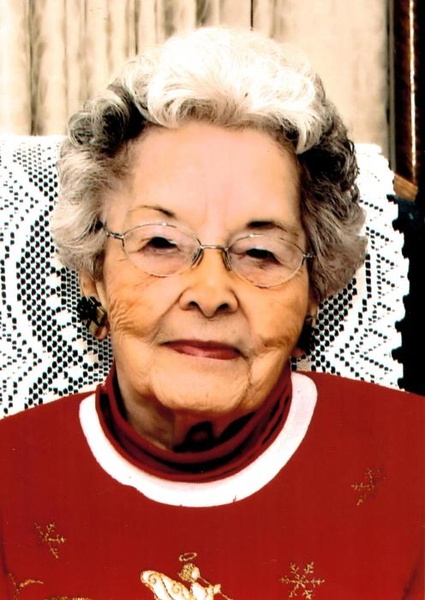 O n May 22, 1918, Rose Evelyn Ward was born to Frank and Myrtle Pfeiffer Ward on a farm southwest of Centralia, Kansas, and died on January 25, 2018 in Onaga.  Rose Ella, a twin sister, died soon after birth.  Rose Evelyn, as a very premature baby, struggled, survived, and ultimately thrived to live over 99 years.  As a farm girl, Rose Evelyn tended many chores on her parents’ farm, keenly observing all aspects of country life, which she wrote about extensively in her book, Memories from the Heart of Rose.  For eight years she attended a one-room country school, Pleasant Hill, and after graduating, went on to Centralia High School, from which she graduated in 1935.  To become a teacher, Rose Evelyn went back to school to complete a Normal Training Course and she taught one year at the Boardman School near Centralia.

On March 14, 1941, Rose Evelyn Domer was married to her high school sweetheart, Robin Rice Domer II, her husband of 64 years who passed away on January 19, 2005.  They had 4 sons:  Robin III, Dennis, Ken, and Gary Domer.  Rose Evelyn and Bob raised their family to adulthood in the house they bought in Centralia in 1941.  Rose Evelyn was a dedicated homemaker who loved to provide for her family and loved to cook, especially baked bread and cinnamon rolls that she gave away to her neighbors and friends.  With the support of an engaged, extended family, “aunts” and “uncles,” a loving community, effective teachers and schools, inspirational church leaders, scoutmasters, and old-fashioned country values, Rose Evelyn and Bob provided their sons with solid foundations to lead successful lives, thus adding to her many accomplishments.

Rose Evelyn loved music and poetry, and published a book of poetry, the Collected Poems of Rose Evelyn Domer, which was drawn from her experiences of family, community, friends, country, religion, and Kansas life.  Among 2,000 other poets from across the nation, she was invited to the International Society of Poetry convention in Washington, D.C. to read her poem, “9/11”.   The Society awarded her two silver bowls for that poem and other poems she had submitted to the Society.

Her parents, Frank and Myrtle Ward, her sisters Ava Mae, Mildred, and Rose Ella, and her brother, Richard Dee Ward, preceded her in death.  Her four sons and many other family members survive, including 11 grandchildren, 16 great grandchildren, and one great great grandchild as well as their families.

Memorial services will be Monday, January 29, 2018 at 2 p.m. at the West Centralia Community Church in Centralia, KS. Visitation will be from 1:00 to 2 p.m. prior to service time at the church. Private inurnment will be held at a later date. In lieu of flowers, memorial contributions may be made to the Centralia Community Church or the Eastridge Nursing Home, sent in care of Popkess Memorial Chapel, 814 Castle, Seneca, KS 66538.

To order memorial trees or send flowers to the family in memory of Rose Domer, please visit our flower store.