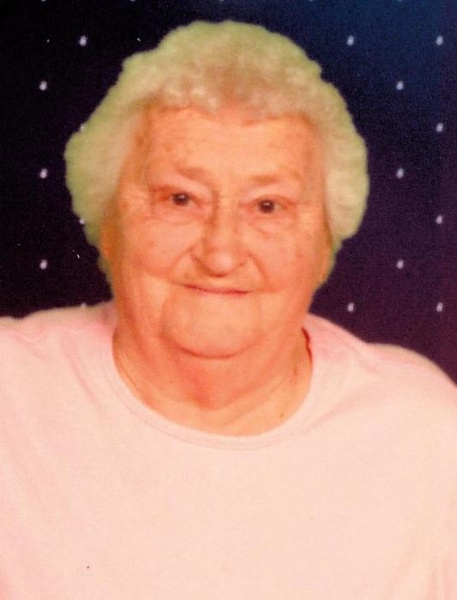 Rose Mary was born February 17, 1929 at home in Oneida, Kansas to Edwin E. Bauman, Sr. and Mae (Milne) Bauman. She was the third of four children. She was united in marriage to Allen G. Garber on July 19, 1946 in Washington, Kansas. Rose Mary and Allen lived and farmed south of Berwick, Kansas. She was a member of the NorthRidge Church in Sabetha.

Rose Mary spent her life caring for her family. She also worked various times at the Sabetha Community Hospital as a Nurse’s Aide, and Midway Café as a waitress. Rose Mary owned Sunny Fabric Store, and raised hogs and various other farmers’ wife jobs, such as raising a big garden, and canning the produce.

She is preceded in death by her parents; her husband, Allen G. Garber of 62 years; one brother; and two great grand-sons.

Funeral service will be Thursday, April 20, 2017 at 11:00 a.m. at the NorthRidge Church in Sabetha.  A visitation will be Wednesday, April 19, 2017 from 6:30 p.m. to 8:00 p.m. at the Popkess Mortuary Chapel in Sabetha.  The interment will be made in the Sabetha Cemetery.  Memorial contributions may be made to the Alzheimer’s Association and the Boys Town of Nebraska, sent in care of the Popkess Mortuary, 823 Virginia Sabetha, Kansas  66534.

To order memorial trees or send flowers to the family in memory of Rose Garber, please visit our flower store.