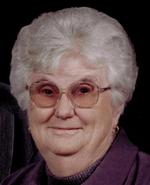 R osetta Louise (Eisenbise) Bartram, 90, of Berwick, Kansas died Saturday, August 25, 2012 at the Apostolic Christian Home in Sabetha.  Rosetta, daughter of James & Verna (Rieger) Eisenbise was born July 7, 1922 in Fairview, Kansas.  Rosetta graduated from high school in her hometown of Fairview.  She was united in marriage to James E. Bartram of Berwick, Kansas on February 6, 1942.  They moved to Berwick, where they raised their family and lived their entire life together.  Shortly after marriage, Jim was drafted in the U.S. Army.  Rosetta stayed at home in Kansas, while Jim was in Germany, and gave birth to their first child, Betty Anne.

James & Rosetta had celebrated 67 years of marriage before James passing on December 10, 2009.  They owned & operated Bartram Truck Line for 50 years, retiring in 1988.  Rosetta was a homemaker, as well as, bookkeeper & truck driver for their family owned business.  She was a long-time member of the Congregational Church (NorthRidge) of Sabetha where in earlier years she taught Sunday School classes.  She loved spending time with family & friends and playing a variety of card games.  Her hobbies included sewing, latchkey, word searches & walks around the town of Berwick.  Rosetta has always been a very giving person, always doing for others before herself.

She was preceded in death by her husband, James Edward Bartram; her parents, Verna and James Eisenbise; her granddaughter, Julie Niehues.

Funeral service was held Saturday, September 1, 2012 at 10:30 a.m. at the NorthRidge Church in Sabetha with Chris Geyer officiating.  Shane Spangler served as pianist and Stew and Gayleen Frederick sang. Casket bearers were Mark Scarlett, Michael Yost, Jeffrey Niehues, Kirk Eisenbise, Taner Scarlett, Becky Richardson, Craig Richardson, Alan Hartter and Lester Niehues.  The family greeted friends Friday evening from 7:00 to 8:30 p.m. at the Popkess Mortuary Chapel in Sabetha.  Interment was made in the Sabetha Cemetery. Memorial contributions may be made to the NorthRidge Church, sent in care of the funeral home.

To order memorial trees or send flowers to the family in memory of Rosetta Bartram, please visit our flower store.