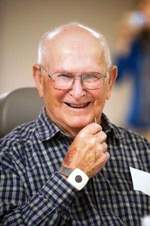 Russell was born February 19, 1915 at Corning, Kansas the son of Byron Edward Allen and Edith Ceona (Dabner) Allen. He graduated from Corning High School in 1934. Following high school Russell and Wava Jane Shoemaker were married on November 15, 1936 in Centralia, Kansas.

Russell is preceded in death by his wife Wava Jane who died April 26, 2003, a grandson Steven F. Allen; a brother Elton R. Allen, and a sister Josie V. (Allen) Hilbert.

A family visitation will be Monday evening from 7:00 – 8:30 pm at the Hayes-Popkess Funeral Home in Centralia, Kansas.

Memorials are being left to the Country Place Senior Living in Seneca and may be sent in care of the Hayes-Popkess Funeral Home (Mailing address: 814 Castle, Seneca, Kansas, 66538)


To order memorial trees or send flowers to the family in memory of Russell Allen, please visit our flower store.