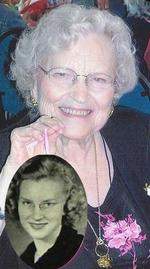 R uth Eileen (Grosdidier) Davis was born on Monday, May 23, 1922 in South Hutchinson, Kansas.  She was the eldest of three children born to Minister Herbert Gail Grosdidier and his wife, Alma.

Eileen, as she liked to be called, graduated from Burdett High School in Pawnee County, Kansas.  After high school, she continued her education at Southwestern College in Winfield, Kansas. Music always played a very important part of her life.  While at Southwestern, she was a member of the A Cappella Choir.

In 1943, she became the bride of the late Mr. Fred Junior Davis from Morrill, Kansas.  Fred was the son of Fred E. and Dora Davis.  To this marriage, two children were born, Daryl and JoAnn.

While married almost sixty years, Fred and Eileen and their children lived in Kansas, Texas and Florida.

As a young mother through the age of retirement she was a self-employed piano teacher.  She also was a salesperson in numerous department stores, a high school choir director and an Avon salesperson for over fourteen years.

Eileen was very passionate about several things in life; her faith, her family and her fashion.  Let’s not forget her music.  Her love for music included playing the piano, the organ and singing in various choirs.

Mrs. Davis was a life-long member of the Benevolent, Patriotic Order of Does, Drove #86, Winter Park, Florida.  She held the office of Musician for a number of years.

Over the last five years, she resided at Plantation Bay Rehabilitation Center in Saint Cloud, Florida.  While there, she started a choir for her fellow residents, played the piano before dinner each evening and recently served as President of the Residents Council at the facility.

While enjoying the Christmas holiday with her daughter, Eileen’s health suddenly declined.  Although hospitalized, the final months of her life were spent surrounded her loving family and friends.  She transitioned from her earthly home on Wednesday, February 20, 2013 at the wonderful age of 90.

Left to cherish her memory are a son and daughter-in-law, Daryl and Sherry Davis of Albuquerque, New Mexico and a daughter, JoAnn Davis Tucker-Hall of Saint Cloud, Florida also one sister-in-law, Geraldine Davis of Albuquerque, New Mexico.  Her pride and joy were her grand-daughter, Shannan Tucker of Saint Cloud, Florida and her great grandson, Brayden Tucker Phillips.

Mrs. Davis is also survived by a host of nieces, nephews and cousins.  Her presence will be missed by the residents and staff at Plantation Bay, the Seasoned Saints social group, St. Cloud, as well as other sorrowing friends.

To order memorial trees or send flowers to the family in memory of Ruth Davis, please visit our flower store.