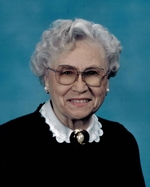 Ruth Esther Picton went home to be with The Lord early Saturday morning, October 1, 2011. She had been a resident at the Sabetha Manor for a number of years.

She was born on the family farm near Hamlin, Kansas on March 20, 1917, the daughter of William G. and Jessie (Affleck) Hinton.
She attended Blain Country Grade School, and graduated from Hamlin High School. She was raised and baptized in the Methodist Church in Hiawatha. She married Everett V. Picton on November 8, 1936 at the Methodist Church parsonage in Hiawatha.

Their first home was the John and Eliza Picton farm near Padonia, then several years later moved to the farm that had been purchased in the 1870’s by Ruth’s paternal grandparents, James and Nancy Hinton . They became members of the Hamlin Baptist Church. They farmed crops, raised a dairy herd and broiler chickens, and sold hatching eggs.

She was preceded in death by her husband, Everett who died on November 24, 1989; her parents; three brothers, William, Howard, and Bruce Hinton.

Funeral services will be Thursday, October 6, 2011 at 10:30 a.m. at the Popkess Mortuary Chapel in Sabetha.   Visitation from 9:30 until service time at the funeral home. Interment will be in the Hamlin Cemetery. Memorials may be made to Ag in the Classroom through the Brown County Soil Conservation Service, sent in care of the funeral home, 823 Virginia, Sabetha, KS 66534.

To order memorial trees or send flowers to the family in memory of Ruth Picton, please visit our flower store.