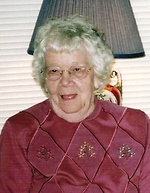 Ruth married Elmer “Banty” Stalcup on August 7, 1943 in Sweetwater, Texas.  While Banty served in the European Theatre, Ruth returned to Onaga and worked for the telephone company.  Upon her husband’s return, the couple moved to a farm south of Centralia where they raised their family of three children.

Upon their retirement from farming, Ruth and Banty moved to Centralia and Ruth began working at the Crestview Nursing Home in Seneca as a CNA.  She worked until 1986 when she began taking care of her husband.  Ruth was known for her sewing, crocheting, pie making and sense of humor.  Ruth was a member of the First United Methodist Church in Centralia.

Ruth was preceded in death by her husband, her parents and 3 brothers, Kenneth, Oscar J. and Frank.  Ruth is survived by her three children; Steve of Topeka, Susan (Dean) Strunk of Anchorage, Alaska and Peggy (Larry) Winkler of Wamego.   Also surviving are six grandchildren and four great grandchildren.

Funeral Services will be Wednesday, November 23, 2011 at 10:30 a.m. at the First United Methodist Church in Centralia.  Visitation will be held from 5-7 p.m. on Tuesday evening at the Hayes-Popkess Funeral Home in Centralia. A memorial fund in Ruth’s name has been established with the church and may be sent in care of the funeral home (Mailing address – 814 Castle, Seneca, KS 66538).


To order memorial trees or send flowers to the family in memory of Ruth Stalcup, please visit our flower store.