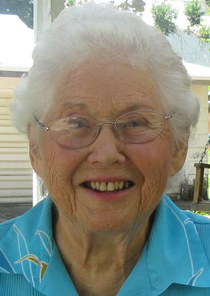 Ruth was born on October 17, 1920 in Washington D.C. to Dr. Charles and Clara (Sherman) Mangels. At the age of two her mother tragically died, from that time on they were raised by their maternal grandparents in Kansas City, seeing their father during summer and holiday breaks. She graduated from Central High School in Kansas City at the age of sixteen, there after she attended Baker University and was a member of Zeta Tau Alpha sorority. She was president of ZTA her senior year. She met her future husband, Bob Williams during her time at Baker. She graduated with a degree in Education in 1941.

Ruth took her first job as a teacher in Wheaton, Kansas and after a year and a half, her and Bob were married in Kansas City. They then traveled to Boston, Massachusetts where Bob was attending seminary. During World War II, Ruth lived in various naval bases while her husband was a naval chaplain. After the war, following her husband’s ministry they lived in Grand Island (NE), Blue Rapids, Eureka, Lenexa, Onaga, Ottawa, Centralia, KS and Springfield (SD). Ruth and Bob had four children and Ruth began teaching again after her children all were in School. She taught in Wheaton, Fostoria, Pomona, Ottawa, and Wetmore, KS.

Ruth was very involved with the church. She was the volunteer secretary at many of the places that her husband ministered, typing up all the stencils for the bulletins and other various duties. She also helped with Sunday school, youth group, the women’s fellowship and various groups and clubs in the communities they lived in. As a mother she was also a girl scout leader, den mother… whatever was needed.

They retired in Centralia, KS where they could be near to friends and family. Ruth and Bob became “snow birds” during the early years of their retirement, wintering in Mission, Texas. She continued to stay active by volunteering with the church and other community activities. Ruth was an excellent grandmother and always had homemade cookies readily available. Everyone enjoyed being spoiled by Ruth. Ruth was a kind and generous woman who always found the good in everybody. She was a loving wife, mother, grandmother, and friend and will be greatly missed.

She was preceded in death by her parents, her sister, Dorothy Jaynes, her husband, and a son, Milan Williams. She is survived by a son, Bob Williams Jr. and his wife Bogadi in Mochudi, Botswana, Africia; two daughters, Sally Williams in Noonan, North Dakota and Sharon and husband, Dennis Lowry in Silver Lake, Kansas; five grandchildren, Lesedi and Kafela Williams in Gaberonne, Botswana, Sara Wapelhorst in Junction City, Kansas, Austin Blake in Seattle, Washington and Thomas Blake in Lawrence, Kansas and two great granddaughters.

To order memorial trees or send flowers to the family in memory of Ruth Williams, please visit our flower store.