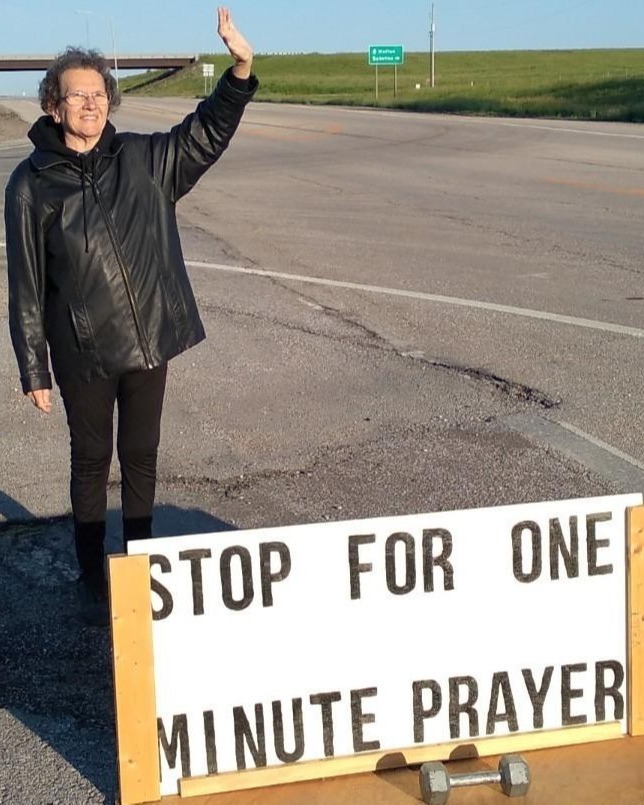 Sara Homan, 64, of Fairview, Kansas entered eternal and unspeakable glory under the loving care of and surrounded by her family at her home in Fairview on December 19, 2022.

Sara was born on July 29, 1958, to Charles and Rosa (Micelli) Thide in Northport, New York, and was the sixth child of ten children.  She grew up in Northport, a bay town on the north shore of Long Island, New York.  Sara loved the outdoors, animals, and the water, and enjoyed water skiing, fishing, riding her horse, and playing football with her family.  She graduated from Northport High School in the class of 1975.

Sara worked a side job until she enlisted in the United States Air Force on October 18, 1979.  After being honorably discharged, she and sister, Madelyn, joined a small church where Sara met the two loves of her life, Jesus Christ and her husband, Dan.  Sara and Dan were united in marriage on May 7, 1983, and began their life of service to the Lord which included street evangelism, community outreach, establishing a church, working at a mission, and becoming ordained ministers. Throughout the years, they continued working for the Lord which was the underpinning for their life together.

Sara’s love for flowers and gardening were witnessed everywhere she lived and in the many churches that she attended.  Alongside her life of serving the Lord, she was a substitute teacher, Home Economics teacher, and worked in the school office at Faith Academy in Farmingville, New York where her daughters attended school.  She also began a career with Coldwell Banker Realty in Shirley, New York and then in Ocala, Florida where she was a top sales agent for several years.  In her spare time, she judged equestrian events and made many connections through Ocala Breeder Sales Horse Auctions in Ocala, Florida.  Sara’s love for horses was something that she and her sister, Joann shared with each other throughout the years.  Sara and Dan moved to Fairview to be near their grandchildren, her daughter, Jessica, and Dan's sister, Donna Ulmer, and Donna’s family.

In Fairview, Sara and Dan joined a local church and created their own outreach for the solar eclipse and prayed for people driving through Fairview on US Highway 36.  Her family, friends, and spending quality time with them was paramount to her.  She was passionate about her family and the Lord, and she was never afraid to speak the truth in love.  She enjoyed frequent talks with her three sisters and enjoyed her last Thanksgiving with her sister, Rosemary, Dan, her daughters, Jessica and Bethany, her grandsons, and her granddog, Buddy.

Sara was preceded in death by her parents and her two brothers, Frederick and Charlie.

Sara is survived by her husband, Dan of their home; her two daughters, Jessica (James) McCulloch of Fairview and Bethany Homan of Goose Creek, South Carolina; her three grandsons, Jacob, Jeremiah, and Jesse; her three sisters, Madelyn, Rosemary, and Joann; her four brothers, Douglas, Vincent, Joseph, and Billy; her 21 nieces and nephews; her granddog, Buddy.

Funeral service will be held on Wednesday, December 28, 2022, at 11:00 a.m. at the Crossroads Wesleyan Church in Sabetha, Kansas.  A visitation will be held on Tuesday, December 27, 2022, from 5:30 p.m. to 7:30 p.m. at the Popkess Mortuary Chapel in Sabetha.  The interment will be made in the Leavenworth National Cemetery on Thursday, December 29, 2022, at 12:30 p.m.  In lieu of flowers, memorial contributions are suggested to Sara’s grandchildren’s educational fund sent in care of Popkess Mortuary, 823 Virginia, Sabetha, Kansas 66534.

To order memorial trees or send flowers to the family in memory of Sara Homan, please visit our flower store.