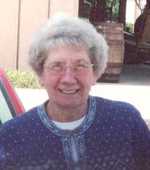 Shirley was born in Pittsburgh Pennsylvania November 12, 1929 to Joseph and Edith Drylie Newman.

She worked at the Medical College Virginia Hospital in Richmond, Virginia and at the Magee Hospital in Pittsburg prior to joining the Navy.  She joined the Navy on March 3, 1953 at St Albans, New York on Long Island.  She was discharged from the Navy on January 3, 1955.  She was adamant that she was a Navy Corps nurse and not a WAVE (Women Accepted for Volunteer Emergency Service).

She was the school nurse for Centralia schools while her children attended school there. She worked in several local hospitals including the Seneca, Onaga and Veterans Hospital in Topeka Kansas where she retired in 1990.  Shirley worked in the nursing profession the majority of her life.

Graveside services will follow the visitation on Tuesday at 11:00 am at the Centralia Cemetery.

Memorials will be left to the Eastridge Care Home and may be sent in care of the Hayes-Popkess Funeral Home , (mailing address 814 Castle, Seneca, KS 66538).

To order memorial trees or send flowers to the family in memory of Shirley Ensley, please visit our flower store.