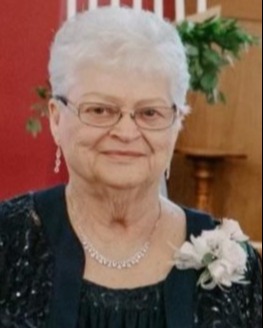 Shirley J. Sparling, 87, of Seneca, Kansas died Thursday, October 20, 2022, at the Nemaha Valley Community Hospital in Seneca surrounded by her family.  She was reunited with her husband and the love of her life, Claire Sparling.

Shirley was born on a farm northeast of Kelly, Kansas on March 29, 1935.  She was the second of four children born to Ernest and Ruth (Cornwell) Grimm.  A lifelong resident of Northeast Kansas, she grew up in Fairview, Kansas and later Oneida, Kansas.

Shirley married Claire Sparling on October 23, 1954, in Robinson, Kansas.  They lived in Oneida, Kansas most of their lives and raised their family there.  She was employed at Duckwalls and the Sabetha Creamery both in Sabetha, Kansas, the Graham Grain Elevator in Oneida, Kansas, as a Certified Medication Aide at Life Care Center of Seneca, and as a cook at the Seneca Grade School.

Shirley was preceded in death by her parents; her husband, Claire, on September 13, 1994; and her brothers, Ernest Grimm, Jr., and Robert Grimm; and her precious puppy, Teddy.

Funeral services will be held on Saturday, October 22, 2022, at 2:00 p.m. at the Popkess Memorial Chapel in Seneca, Kansas.  A visitation will be held prior to the service from 1:00 p.m. to 2:00 p.m. at the chapel.  A reception will be held at the Seneca American Legion following the funeral services.  Shirley will be peacefully laid to rest at a later date in the Oneida Cemetery in Oneida, Kansas.  Memorial contributions are suggested to the Life Care Center of Seneca and the Nemaha County STEP Foundation sent in care of Popkess Memorial Chapel, 814 Castle Street, Seneca, Kansas 66538.
To order memorial trees or send flowers to the family in memory of Shirley J. Sparling, please visit our flower store.