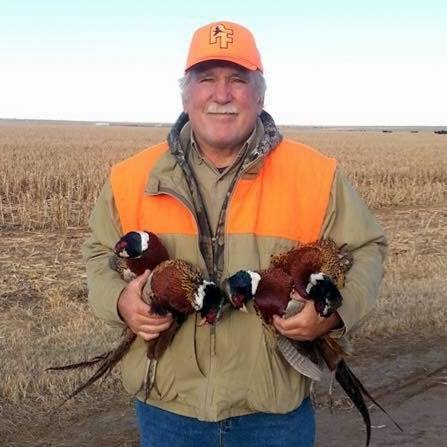 Stephen was born in Sabetha, KS on October 20, 1955 to Marshall and Geneva (Brigham) Ukele. He attended Excelsion Country School, Sabetha Jr., and Sabetha Senior High Schools, graduating in 1973. He also attended Highland Community College and graduated in 1975. On May 3, 1986, he married Pamela Sue Howard in Sabetha, KS.

During high school Stephen was active in 4H, FFA, football, and wrestling. He continued playing football in college and participated in the annual Highland Community College alumni football game for nearly 30 years. He loved being outdoors and was an avid fisherman and hunter. He also enjoyed being on the water and water skiing. Stephen was a stockman and farmer for his entire life, working as a partner in the Ukele family farm operation. He was very proud of his family and children, encouraging and supporting them in all that they did.

Stephen helped found the Sabetha Kids Wrestling Club, where he was a coach for more than 25 years and he also was a referee for almost 20 years. Stephen was incredibly youth oriented and served an important role mentoring local kids.

Stephen was a member of the First United Methodist Church of Sabetha where he had served on the trustee board, as a high school Sunday school teacher, as a lay speaker, and played church softball. He served on the Ed A. Holdbrook Trust and the Berwick Co-op board.

Stephen was a loving husband, father, and grandfather and a deeply devoted uncle. He was a pillar in the community and was willing to do anything for those that needed his help. He leaves behind a beautiful legacy and will be remembered for his gentle heart.

He is preceded in death by his father, Marshall H. Ukele; his mother, Geneva F. Ukele; and his aunts, uncles and grandparents.

Stephen is survived by his wife, Pamela S. (Howard) Ukele of Sabetha; his children: a son, Ryan D. Haug and wife, Emily of Olathe, KS; a daughter, Anna M. (Ukele) Weiser and husband, Aaron of Olathe, KS;  a grandchild, Adelaide Weiser; and a granddaughter due in February 2018; his sisters, Pamela D. Ukele of Hannibal, MO, Paula S. (Ukele) Miller of Shawnee, KS; a brother, Lee F. Ukele of Sabetha, KS; and numerous cousins, nieces, and nephews.

Funeral service will be Saturday, December 2, 2017 at 10:30 a.m. at the NorthRidge Church in Sabetha. Visitation will be Friday, December 1, 2017 from 6:00 to 8:00 p.m. at the Sabetha First United Methodist Church. Interment will be made at the Albany Cemetery. In lieu of flowers, memorial contributions may be made to Sabetha Kids Wrestling Club or Sabetha First United Methodist Church, sent in care of Popkess Mortuary, 823 Virginia, Sabetha, KS 66534.

To order memorial trees or send flowers to the family in memory of Stephen "Steve" Ukele, please visit our flower store.