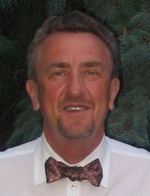 A lways dedicated to reason and integrity, the Honorable Steven Patrick Deiter employed his innate compassion and intellect in his personal life, as well as his courtroom.  After two years navigating the challenges of ALS, Judge Deiter died in the early morning on October 21 at 57 years old.

Steve was born in Topeka on July 22, 1955, the oldest child of Howard and Louise (Cowan) Deiter. He was raised in Maple Hill, where he helped with his father’s farming operation. He graduated from St. Marys High School in 1973 and continued his education at Kansas State University, completing his Bachelor in Science in Agriculture in 1977. He married the late Robin (Stuewe) Deiter of Alma on July 21, 1978. With his wry sense of humor, Steve often joked that he was married a day and aged a year, as his birthday fell the day after his wedding.

While Robin taught in Topeka, Steve attended Washburn Law. During this time they welcomed their first child, Ryan. Steve graduated law school in December of 1980 and was admitted to the Kansas Bar Association in the spring of 1981.

Steve and Robin moved to Sabetha, where Steve built his private practice, and they continued building their family, with the births of Meaghan and Brandon. In 1987, Steve opened Deiter Law Office, and his appointment as Nemaha County Attorney soon followed. He also served as Sabetha City Attorney during this time.

In 1991, Steve and Robin moved their family to Wylie, Texas, so Steve could attend Dallas Theological Seminary, also while serving as City Attorney in Wylie.  While in Texas, Steve and Robin welcomed T.J. and Amy to the family.

The Deiters returned to Sabetha in 1994, and Steve went into practice with Martin Mishler, forming Mishler and Deiter Law Offices. In 1995 the duo expanded their partnership, purchasing Nemaha County Abstract and Title Company. They also served as Sabetha City Attorneys.

Steve and his family were devastated by the loss of Robin in 2004. As his children left home, Steve became an avid cyclist. He participated in several Bike Across Kansas, MINK, RAGBRAI, and Cycle Zydeco rides. He met Elizabeth “Libby” Ensley, Shawnee Co. Election Commissioner, on one such ride, and the two married April 30, 2011.  Steve welcomed two step-children, Jessica Ensley Ostmeyer and Daniel Ensley.

In 2008 Steve was appointed District Magistrate Judge and then elected to the same position in 2010. He served in this position until June of this year, when the progression of his disease took his ability to speak. A man of solid faith and passion for God, Steve impressed family and friends with his courage and peace throughout his illness. Steve led quietly, through example, and inspired many over the years with his selfless dedication to family and friends.

The family sends their deepest thanks to all those who helped support Steve during his illness. We will never be able to fully express our gratitude for the countless kind acts and overwhelming blessings.

Steve is preceded in death by his first wife, Robin.

Funeral services will be Thursday, October 25, 2012 at 10:30 a.m. at the NorthRidge Church in Sabetha. Visitation will be Wednesday, Oct. 24, from 6-8 p.m. at the NorthRidge Church in Sabetha. The interment will be made in Maple Hill Cemetery in Maple Hill, Kansas at 3:00 p.m.  Memorial contributions may be made to the ALS Association, sent in care of Popkess Mortuary in Sabetha 823 Virginia, Sabetha, Kansas 66534.

To order memorial trees or send flowers to the family in memory of Steven Deiter, please visit our flower store.