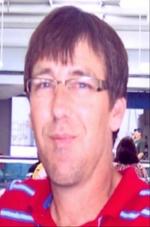 T imothy Charles Edelman, 49, of Sabetha, died Tuesday, October 30, 2012 at a hospital in Manhattan, Kansas.  Tim was born in Sabetha, Kansas on July 18, 1963, the son of Clemens and Marjorie (Steidinger) Edelman.  He started working at Edelman’s Lumberyard in 1979 and worked there until 1996.  Tim worked for Wenger Manufacturing as a purchaser and planner from January 30, 1995 until his death.


Tim married Margaret Koch on October 4, 1985. To this union five children were born.  They later divorced.  He gave his life to Christ as a young man, and was a member of NorthRidge Church in Sabetha.  His greatest joy was being with his children and family.  Tim also enjoyed carpentry work all his life and continued to practice this until his death.

Tim was preceded in death by his father, Clemens Edelman on December 27, 1992.

Funeral service will be Saturday, November 3, 2012 at 10:00 a.m. at NorthRidge Church in Sabetha.  Visitation will be Friday evening 6:00 to 8:30 p.m. at the church.  Interment will take place at Albany Cemetery.  Memorial contributions may be made to the Tim Edelman’s Childrens Education Fund, sent in care of the Popkess Mortuary, 823 Virginia Sabetha, KS 66534.

To order memorial trees or send flowers to the family in memory of Timothy Edelman, please visit our flower store.