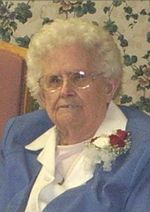 Trula Lucille (Morrison) White, 95, of Centralia, KS, passed on May 12, 2010 at the Eastridge Care Home in Centralia. Trula was born April 4th, 1915 to Robert Taylor Morrison and Alice Myrtle (Dodd) Morrison on the Stringtown Road south of Baileyville, KS. She married Fred White in 1937. They celebrated 60 years together.

She has lived her life close to the Centralia community; helping Fred with farming, working at the Campbell's Soup at Tecumseh, NE also Fred and Trula served 19 years as sextons of the Centralia Cemetery.

She was preceded in death by her husband Fred in 1997, their oldest son, James (Jim) in 2000 and a great grandson Riley, in 2000; three daughters in law, Mary Alice, Diane and Linda; a sister, Avis Walck; and brothers, Marion, Martin, Wilbur and Lester Morrison.
Survivors include, a daughter, Norma Henton and her husband Val of Dodge City, KS, sons, Leon and his wife Dorothy of Centralia, KS, Harry of Cottonwood Falls, KS, a daughter in law, Sharon White of Lampe Missouri. There are 14 grand and step grandchildren and 30 great grand and step great grandchildren.

Trula was cremated and a memorial service will be Monday, May 17, 2010 at 11:00 AM at the United Methodist Church in Centralia. There will be a visitation from 10:00 AM until service time at 11:00 at the church. Rev. Deborah Hanes-Nelson will conduct the services. Inurnment will be in the Centralia Cemetery at a later date.

Memorials are being left to the Centralia Cemetery and may be sent in care of the funeral home. The Hayes-Popkess Funeral Home in Centralia is in charge of arrangements.

To order memorial trees or send flowers to the family in memory of Trula White, please visit our flower store.