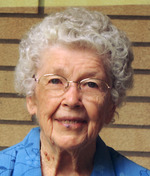 A memorial service will be set at a later date in June with interment in the Marysville Cemetery.

Velma Plegge was born Aug. 2, 1912, at Marysville, the daughter of Frank and Hannah Krause.

She married Harold Plegge in 1943.

She was a volunteer for many years for the RSVP.

She was preceded in death by her husband in 1978; her infant son, Allen Dean Plegge; and her sister, Viola Goebel, Lincoln.

To order memorial trees or send flowers to the family in memory of Velma Plegge, please visit our flower store.