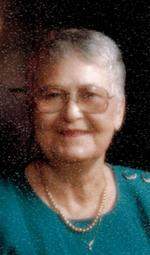 She was born May 3, 1925 in Crystal City, Texas, the daughter of Martin and Alta (English) Coleman. Vera attended Crystal City High School until 1942, and then went to work in the Crystal Drug Store until she married.

Vera was a devoted mother, grandmother, great-grandmother, and gracious hostess.  She was an active member of the Hysterical Society.

Vera was an avid bowler and had won singles at state bowling three times.  She taught many children in the Sabetha area how to bowl.  Vera was also an avid golfer, and taught all of her grandchildren and many others to play.  Vera also loved to play bridge and taught all her friends to play so she would have someone to play with.  She also pierced many of the young girls ears in Sabetha.

Preceding her in death were her parents; five sisters and two brothers.

She is survived by her husband, Benjamin Fleming; two daughters, Alta Mae Hopp of Phoenix, AZ and Charlotte Ann Hartter and husband John of Sabetha, KS; five grandchildren, and five great-grandchildren; two sisters, Fay Valentine of Uvalde, TX and Shirley Humphres of Alice, TX, as well as many nieces and nephews.

Funeral service is Saturday, February 9, 2013 at 2:00 p.m. at the First United Methodist Church in Sabetha.  Visitation will be Friday evening from 6:30 to 8:30 p.m. at the Popkess Mortuary in Sabetha.  Interment will be in the Sabetha Cemetery. Memorial contributions may be left to the Sabetha Community Hospital, sent in care of the funeral home, 823 Virginia, Sabetha, KS 66534.

To order memorial trees or send flowers to the family in memory of Vera Fleming, please visit our flower store.