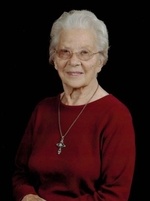 Viola H. Marteney, 85, of Topeka, Kansas died On October 22, 2011 at a Topeka Hospital. She was born on April 15, 1926 the daughter of Floyd Haxton and Myrtle (Bates) Haxton at Sabetha, Kansas. She was united in marriage to Arthur “Joe” Eugene Marteney on June 28, 1947 at Colby, Kansas. She moved to Sabetha in 1950. She worked at the Sabetha Hospital for 13 years and for the Sabetha School District #441 also for 13 years.   She moved to Topeka in 1994. She was a charter member of the First Lutheran Church in Sabetha, and a present member of Calvary Lutheran Church in Topeka. She also is a member of the V.F.W. Auxiliary of Sabetha.

She is survived by one son, Ron Marteney (Robin) of Emporia, Kansas; two daughters, Karen Askren (Andy) and Wanda Hipsher (George) both of Topeka, Kansas; a sister, Grace Dienstbier of Holton, Kansas; one brother, James VanPeyma of Sabetha, Kansas, 9 grandchildren, 10 great grandchildren and many nieces and nephews.

Funeral services will be Thursday, October 27, 2011 at 2:00 p.m. at the Popkess Mortuary in Sabetha. A visitation will be from 1:00 to service time at the funeral home. The interment will be made in the DuBois Cemetery in DuBois, Nebraska. Memorial contributions may be made to the DuBois Cemetery for perpetual care, sent in care of the funeral home, 823 Virginia, Sabetha, Kansas 66534.

To order memorial trees or send flowers to the family in memory of Viola Marteney, please visit our flower store.