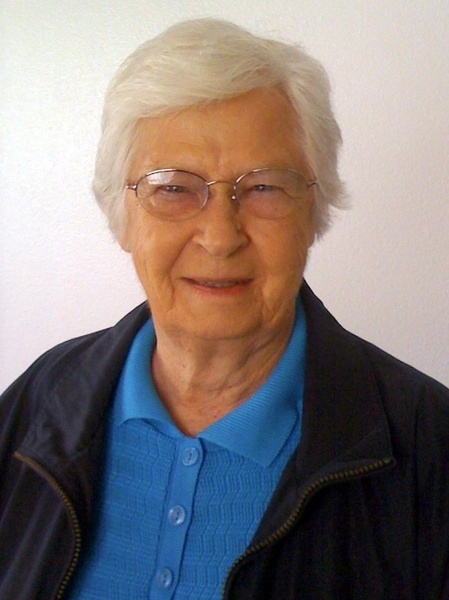 Viola was born to Lewis and Lena (Strahm) Bahr December 3, 1923 in Sabetha, Kansas.  In her youth, Viola spent a lot of time outdoors.  She helped with milking the cows, feeding the pigs, putting up hay, and working in the garden.  Viola had a Shetland pony and buggy that she used to deliver water to the workers who came to help her father with the threshing.  Viola and her sister, Marie, also helped their mother in the house.  Viola attended school in Sabetha for all of her education, and graduated from Sabetha High School in 1942.  After high school, Viola worked at Duckwall’s Variety Store in Sabetha.  She then became a bookkeeper at the feed mill.

Viola married Melvin W. Wenger on June 11, 1944 in Sabetha, Kansas. They lived in Sabetha until 1973 when they moved to Mesa, Arizona, where they lived for thirty seven years. During these years in Mesa, Mel and Viola enjoyed golfing and spending time with friends and family.  After Mel passed away, Viola moved back to the Apostolic Christian West Village Apartments in 2010.  In 2016 she moved into the Apostolic Christian Home where she received unconditional love and care.  When asked what her advice is to the younger generation, she said, “Live each day to the fullest.”

She is preceded in death by her parents; her step-mother, Fanny (Aeschliman) Bahr; her husband, Melvin on July 4, 2010; her brothers, Willard and Clayton Bahr; her sister, Marie Hartter; and a grandson, Joseph Peake.

She is survived by her children, Patricia Circle (David) of Stilwell, KS, and Richard Wenger (Sue) of San Juan Capistrano, CA; and 6 grandchildren and 13 great grandchildren; and many nieces and nephews.

A Celebration of Life will be held Friday, May 25, 2018 at 11:00 a.m. at the Popkess Mortuary Chapel in Sabetha, Kansas. Private inurnment will be made at the Apache Wells Community Church in Mesa, Arizona. Memorial contributions may be made to Apostolic Christian Home, sent in care of Popkess Mortuary, 823 Virginia, Sabetha, KS 66534.

To order memorial trees or send flowers to the family in memory of Viola Wenger, please visit our flower store.