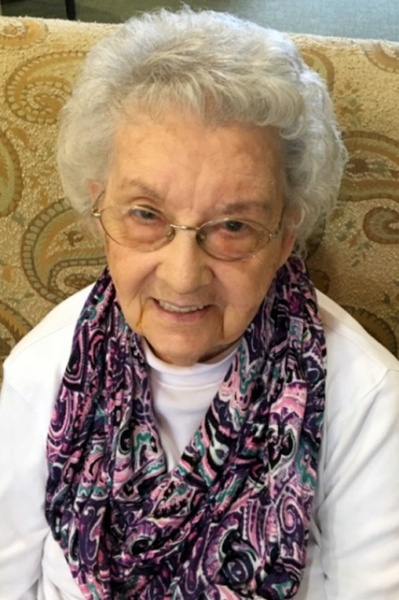 Virginia was born December 29, 1924 in Decatur, Illinois to Frank and Vida (Howie) Buckley. She attended Morrill High School in Morrill, KS and graduated in 1943. She married Gerald S. Howerton on February 19, 1947 in Morrill, KS. Virginia and her husband farmed for many years north of Morrill. They milked 30 to 50 cows on a Grade A dairy. Virginia was a hard worker, and canned, tended the garden, and ran the hay baler when needed. She always had huge meals for the entire family for Easter, Thanksgiving, and Christmas. She played the trumpet in the Morrill High School band, and could still play the harmonica by ear later on in life. Virginia was always singing, humming, or whistling, and always had a great sense of humor. She had many friends, and still does from her past days in Morrill and Sabetha. She was always the first to volunteer to drive school kids for functions, and church activities. After selling the farm, Virginia and her husband moved to Sabetha, KS for their retirement years. They purchased an apartment at the Apostolic Christian Retirement Village. Virginia remained there for a while after Gerald passed away on February 8, 2001, and later moved to Topeka, KS.

She is preceded in death by her parents; her husband, Gerald on February 8, 2001; and a sister, Doris (Buckley) Sharp.

Funeral services will be at 11:00 a.m. on Saturday, October 28, 2017 at Popkess Mortuary Chapel in Sabetha, KS. Visitation will be from 9:30 a.m. until service time. Interment will be made at the Morrill Cemetery. Memorial contributions may be made to Alzheimer’s Association, sent in care of Popkess Mortuary, 823 Virginia, Sabetha, KS 66534.

To order memorial trees or send flowers to the family in memory of Virginia Howerton, please visit our flower store.