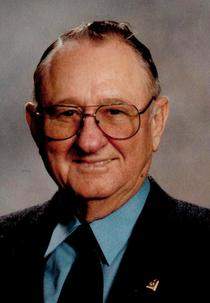 Wilbur was born on a farm near Sabetha on September 22, 1929, the son of Emery and Mae (Bentley) Campbell.  He attended school at Capioma, Woodlawn, and Sabetha.  Wilbur was united in marriage to Darlene Wende in Seneca, KS on February 19, 1950. They were married for 65 years.

Wilbur did custom harvesting throughout the Midwest. He spent a lifetime farming in the Sabetha community. He was active in the Masonic Lodge in Sabetha, which later moved to Hiawatha. Wilbur was also a member of the Arab Shrine Temple of Topeka.

Funeral service will be held Monday, June 8, 2015 at 10:30 a.m. at the Popkess Mortuary in Sabetha. The family will greet friends one hour prior to service time. Memorial contributions may be left to Sabetha Community Hospital, or the First United Methodist Church, sent in care of the funeral home, 823 Virginia, Sabetha, KS 66534.

To order memorial trees or send flowers to the family in memory of Wilbur Campbell, please visit our flower store.