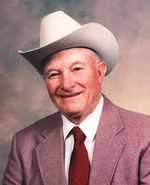 Harold was born October 30, 1923 at Centralia, KS the son of Will and Lessie Hailey Hoskins. Harold graduated from Centralia High School and enlisted in the U.S. Navy in 1940 and served until honorably discharged in 1946 serving aboard the USS Ellyson.

Harold returned to the farm in 1948, began a life of involvement in the Shorthorn cattle breeder industry. Harold began showing cattle in the 1960’s, always striving for quality, which is evident by his many trophies, plaques, banners and photographs. He was very active and held several offices in the Kansas Shorthorn Association, Northeastern Kansas Shorthorn Association, past president and a recipient of the Builder of Breed Award in 1995. Harold also encouraged and influenced many 4-H members through his involvement as both a Nemaha County Fair Board member and $-H livestock leader. He retired from the cattle business in 2003 and at an earlier date from the U.S. Postal Department Rural Mail Carriers. He was a diligent mail carrier enjoying every mile and each household.

He was also preceded in death by his parents and sibling, Alvin and Maurice Hoskins, Thelma Thompson and Faye Kelly. Several nephews and nieces also survive Harold.

Harold was a current member of the St. Patrick’s Catholic Church in Corning, KS, the American Legion and VFW of Centralia an National Association of Retired Federal Employees.

Services will be Friday, December 17, 2010, at the St. Patrick’s Catholic Church, Corning, KS at 10:00 AM. Father Arul Carasala will celebrate the Mass and Dr. Scott Caulley will also assist with the services. Burial will be in the Centralia Cemetery with the US Navy Honor Guard and the Armstrong Moyer American Legion Post conducting Full Military Honors. Harold will lie in state at the Hayes-Popkess Funeral Home, Centralia, KS where family and friends will meet Thursday evening from 7:00 – 8:30 PM, the Rosary will be prayed at 7:00 prior to a visitation.

In lieu of flowers memorial contributions may be made to the Veterans Association, Alzheimer’s Association or the donor’s choice and sent in care of the Funeral Home (mailing address 814 Castle, Seneca, KS 66538).


To order memorial trees or send flowers to the family in memory of William Hoskins, please visit our flower store.