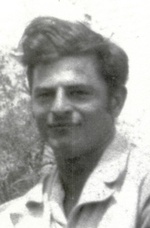 W illiam “Bill” Meister, 85 of Sabetha died Friday, September 21, 2012 at the Apostolic Christian Home.  Bill was born on June 13, 1927 at the family farm in Humboldt, Nebraska to William and Adella (Fidermutz) Meister.  He graduated from Dawson High in Dawson, Nebraska in 1944.  He was a World War II veteran serving in Guam.

He worked on the oil rigs mostly in Colorado and Wyoming in the early 1950’s.  He farmed the family farm for several years after his father’s retirement.  He later moved his family to Sabetha, Kansas where he worked for several local trucking companies until his retirement.  He found retirement wasn’t for him and began driving a school bus for Sabetha seven years ago.  He truly loved each and every one of “his kids”.

He was preceded in death by his parents; three brothers, Melvin, Leo and Dennis Meister; two grandsons, Michael Gerber in 2005 and Charles Meister in 2007.

To order memorial trees or send flowers to the family in memory of William "Bill" Meister, please visit our flower store.