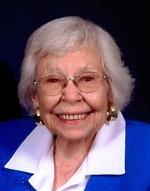 Wilma married Chadwick Howard on August 6, 1941; he preceded her in death on August 18, 1990. She worked as a secretary and bookkeeper for businesses in Horton and Hiawatha retiring in 1983 from the Hiawatha Daily World. Wilma was a member of the Susanna Circle, the United Methodist Women, Delphian Club of Horton, the American Legion Auxiliary Post #66, and Gray Ladies (Red Cross) Volunteers in Hiawatha. She remarried on September 1, 1991 to Donald Arthur Jones at Cedar Vale, Kansas; he preceded her in death on July 19, 2010.
Wilma was preceded in death by her parents; two brothers, Luther Clark and Arthur Clark; and a son, Dalton Howard.
Survivors include daughter, Brenda Brand (Tom) of Silver City, New Mexico; daughter-in-law, Janet Howard of Topeka, Kansas; step-son, Roger Jones (Kathy) of Smithfield, Nebraska; step-daughters, Judy Rilinger (Bob) of Sabetha, Kansas, Becky Davis (Dave) of LaMar, Colorado, and Pam Mason (Steve) of Parker, Colorado; 12 grandchildren, 13 great-grandchildren as well as numerous nieces and nephews.
Funeral services will be held Saturday, November 6, 2010 at 2:00 p.m. at the First United Methodist Church in Hiawatha. A visitation will be held one hour prior to the service. Interment will take place at Mount Hope Cemetery in Hiawatha. Memorial contributions may be made to the First United Methodist Church in Hiawatha, or to the charity of the donor’s choice, sent in care of the funeral home.
To order memorial trees or send flowers to the family in memory of Wilma Jones, please visit our flower store.