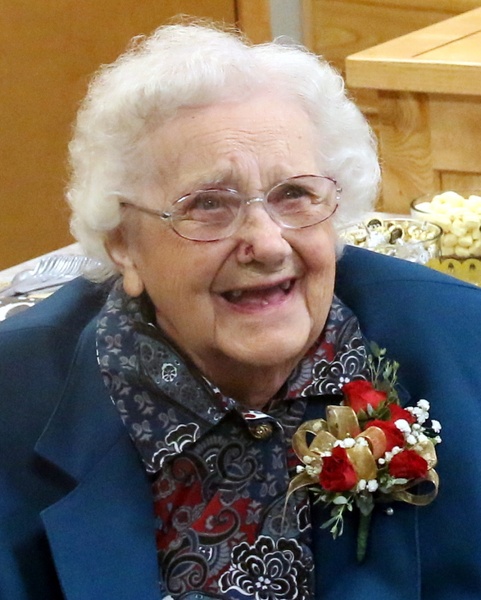 Wilma was born October 8, 1918 in Sabetha, KS the oldest of three daughters born to Glenn and Minnie (Nohl) Walker. Wilma attended Victory Country School for eight years before she went to the Sabetha High School, and graduated in 1936.

She met her future husband, LeRoy Strahm, while roller skating at Sycamore Springs. They married in 1947 after LeRoy returned home from serving in the Marines. To this union two children were born. Donald was born in 1952 and Carol was born in 1955. Wilma worked at Fred Darval’s Drug Store and later at Paul Miller’s Drug Store. When Wilma wasn’t working in the drug stores, she was busy at home keeping the house up, cooking, butchering, gardening and attending her children’s events.

In the early 1970’s, Wilma and LeRoy purchased the Fina Service Station in Sabetha. They owned the business until the mid-1990s. They were both active in supporting causes for veterans, especially since the war affected their lives so much. Wilma was a part of the Sabetha Ladies V.F.W. Auxiliary and the American Legion Auxiliary, while LeRoy was an important part of the Sabetha V.F.W.

She was preceded in death by her parents; her husband, LeRoy Strahm; and her sister, Irene Williams.

She is survived by her daughter, Carol Strahm of Manhattan, KS; her son, Don (Lorinda) Strahm of Sabetha, KS; her sister, Mildred Walker of Sabetha, KS; her sister-in-law’s, Lila Rice and Darlene Drolett both of Topeka, KS; and seven grandchildren and 15 great grandchildren. She will always be loved and remembered for being a loving wife, mother, and grandmother, great grandmother, sister, aunt, and friend.

Funeral service will be held Saturday, April 20, 2019 at 11:00 a.m. at the Popkess Mortuary Chapel in Sabetha, KS. Visitation will be held from 10:00 a.m. to 11:00 a.m. prior to service time at the funeral home. Interment will be made in the Sabetha Cemetery. Memorial contributions may be made to the Sabetha Ladies V.F.W. Auxiliary, sent in care of Popkess Mortuary, 823 Virginia Street, Sabetha, KS 66534.

To order memorial trees or send flowers to the family in memory of Wilma Strahm, please visit our flower store.