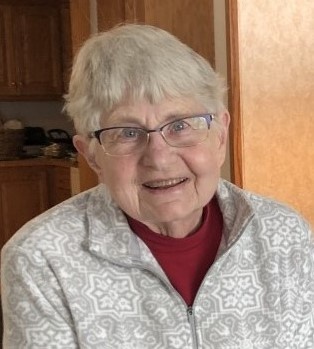 Freddie was born on August 22, 1933, the daughter of Leroy E. and Helen (Phillips) Ruse at Sabetha, Kansas.  She graduated from Sabetha High School in 1951.  She was united in marriage to Ival R. Haflich in 1952, and they made their home on the farm southwest of Sabetha.  They were blessed with four children, Anne, Jim, Laurie, and Sara.

Freddie graduated from Kaw Area Vocational-Technical School in Topeka, Kansas, Stormont Vail School of Nursing in Topeka, and Fort Hays State University in Hays, Kansas where she graduated with the academic distinction of magna cum laude.  Also, while at FHSU, she was the recipient of the Leora B. Stroup Award.  This award was given to Freddie for her outstanding clinical performance, community involvement, and academic excellence.  In addition, she was elected to the Nu Zeta chapter of Sigma Theta Tau International Honor Society of Nursing.  She was employed at the Sabetha Community Hospital and the Nemaha County Hospital in Seneca, Kansas as an LPN.  Then, she was employed at Stormont Vail Health Center as an RN on the telemetry/progressive care unit.  After her retirement from Stormont Vail, Freddie worked part-time at the Sabetha Manor for several years.

Freddie was active in many community organizations.  She was Past Matron of Eastern Star Sapphire Chapter #348.  Also, she had a special lifelong interest in the Busy Jayhawker 4-H Club where she served as a community club leader.  In addition, she served as treasurer on the Capioma Cemetery Board for many years.  She belonged to the First Congregational Church in Sabetha for more than 50 years.  At the time of her death, she was a member of the First United Methodist Church in Sabetha.

She was preceded in death by her parents; her husband, Ival; and her brother, Austin "Ted" E. Ruse.

Memorial services will be held on Wednesday, March 16, 2022, at 11:00 a.m. at the First United Methodist Church in Sabetha, Kansas.  A visitation will be held from 10:00 a.m. until service time at the church.  A private family inurnment will be held at a later date and time.  Memorial contributions may be made to the District #113 Educational Foundation - Esther P. Carpenter Scholarship and to the Mary Cotton Public Library in Sabetha, Kansas sent in care of the Popkess Mortuary, 823 Virginia Street, Sabetha, Kansas  66534.

To order memorial trees or send flowers to the family in memory of Winifred "Freddie" Haflich, please visit our flower store.